The NCAP test of two popular cars from Hyundai, the second-largest car company by share in the car market in India, was done. NCAP is an organisation that provides safety ratings to car manufacturers around the world by crash testing their cars. Safety ratings have become an essential criterion among conscious customers these days, which is why Tata Motors and Mahindra & Mahindra have made strides in sales over the past few years, these companies are some of the safest in India.

Meanwhile, both the biggest carmakers, Maruti Suzuki and Hyundai are still struggling to raise their safety ratings. The total market share of both companies is more than 60% in India. 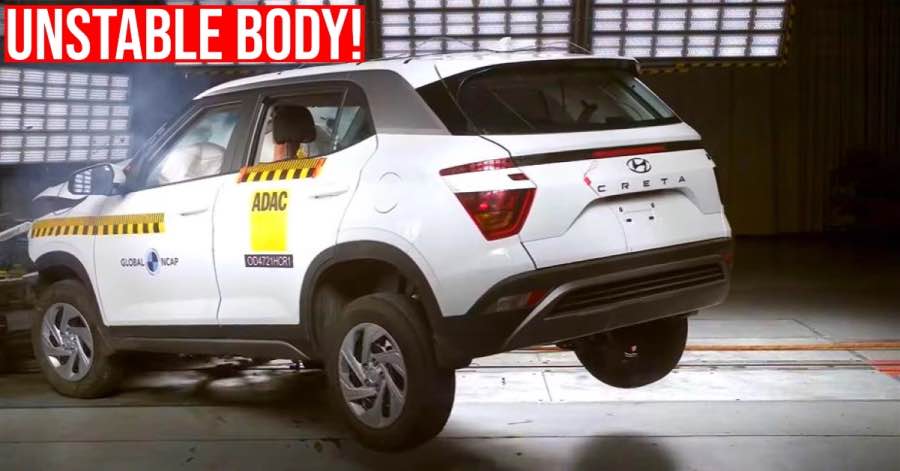 Two Popular cars from car maker Hyundai were tested by the Global NCAP, these cars are scoring good sales figures in the Indian market every quarter, and the recent crash tests conducted by NCAP on i20 and Creta have revealed some major flaws.

This car is making a splash in the compact SUV segment in India, talking about the average sales of the last 6 months, 9619 units of Hyundai Creta are sold in India every month, which is the highest score in its segment.

In the recent crash test, the entire structure of the car was found to be unstable. As mentioned on the official website of Global NCAP, the Creta was tested to the most basic safety specifications fitted with 2 frontal airbags and ABS.

This resulted in an unstable structure and the risk of injury to the driver’s lower legs and feet. The lack of ISOFIX anchors for child safety and 3 point belts in all seating positions indicate that proper precautions have not been taken for child safety

Coming in the premium hatchback segment is one of the favourite cars of Indian buyers. Looking at the sales figures for Hyundai i20 this year, 5830 units were sold. This car is the second best selling car in this segment, the first being Maruti Suzuki’s Baleno.

i20, which is often criticised for poor fuel efficiency; Now there is another cause for concern for the potential buyers. The hatchback has got 3 stars in the Global NCAP crash test. As the website reports, “the i20 was tested for its most basic safety spec equipped with 2 frontal airbags and ABS. During the evaluation, it experienced an unstable structure.