by IS NewsDesk
in Explainers, Opinion Stack 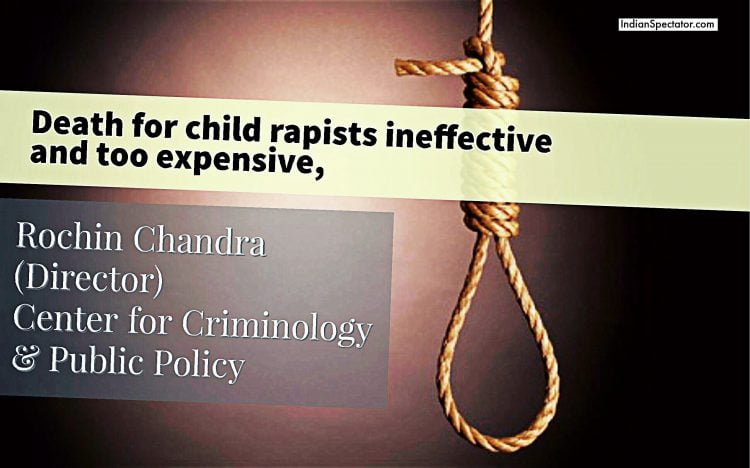 New Delhi, (October 9, 2018): The infamous gang-rape and murder of a woman in New Delhi in 2012 sparked national protests and led to stringent punishments for perpetrators of rape. Almost six years after this incident, the rape and murder of an eight-year-old in Kathua and the sexual assault on a teen in Unnao, shocked the country and the outraged people took to streets, demanding death penalty for child rapists.

Driven in part by public sentiments, the Indian parliament recently passed a law prescribing death penalty for the rape of children younger than 12 years. While this legislation is based on ideology that severe punishments will deter the commission of child rapes, a policy paper, released by Center for Criminology & Public Policy, suggests that expanding death penalty to child rapists is ineffective as a deterrent and is more expensive than other sentencing measures.

The policy paper, which was prepared in consultation with several experts, including legal researchers, police officers, advocates, child and adolescent psychiatrists, and rehabilitation consultants, highlighted the need for stricter implementation of laws, and diversion of public expenditure intochild sexual-abuse prevention programs.

Director of the Center for Criminology & Public Policy, R Rochin Chandra, said death penalty is not only a facile solution to the problem of child rape but its excessive cost of implementation interferes with a spectrum of preventive programs that have been demonstrated to work well”.

“Death penalty regime escapes the decisive cost-benefit analysis, because it is used by the government to distinguish itself by the toughness of their position rather than its effectiveness, Chandra rued, adding that, “before expanding death penalty to child rapists, the government should have carried out a scientific assessment to check whether it acted as deterrent for sexual crimes”.

In its paper, the Udaipur-based think-tank stated that endorsing death penalty for child rapists was a ‘fiscally irresponsible decision’ and its application will disproportionately affect the child victims, adding to the alarmingly low rates of conviction. Emphasizing that execution of death penalty is shrinking the budget for crime prevention programs, Chandra, who has been offering consultancy to state’s CID Crime Branch, said the state police forces run several innovative programs under its public-police outreach projects, which are aimed at solving the problems of crime faced by citizens. For example, recently, Ahmedabad City Police in association with academic criminologists at Raksha Shakti University launched a policing program where they used crime victimization data to understand the conditions that promoted sexual violence against children and subsequently developed a community based intervention model to provide prevention education and awareness around the issue of child sexual abuse”. “But because of government’s heavy reliance on death penalty, the budget for such innovative and workable programmes is shrinking”, Chandra added.

Prison economic overlooked
On how execution of death penalty increased the cost of prison management, the policy paper said:“the government will have to bear the expenses of locking up death row convicts, while also paying a team of judges, defense lawyers and prosecutors for many years often decades to debate whether a sentence of death should be imposed on them. This makes capital punishment more costly than its closest alternative life imprisonment without parole.”

Death penalty will serve differential justice
Pointing out that jurisprudence is always prospective not retrospective, the policy paper revealed that: “death penalty might satisfy public demand for justice to child victims, but it will cause gross injustice to child survivors, whose wrong doers would still be tried under old legislations”.

“The decision to provide death penalty for child rape was a knee-jerk reaction by the government. It will only serve differential justice, where the rape of certain children would be treated more seriously than the rape of another”, added Chandra.

Legal process is rigorous for death penalty
The paper mentioned that during 2004-2015, about 1300 prisoners were put on death row, but of those, only 4 cases resulted in execution. “These figures show that legal process for death penalty is significantly longer and more complex than for life imprisonment, and applying such punishment for child rape will only result in more acquittals than convictions”, the position paper said.

Rapists will kill their victims
On what makes death penalty counter-productive, the paper said: “the threat to death will encourage the rapists to kill their victim in order to cover up the crime and eliminate the prime witness”.

Death Penalty will have a silencing effect on victims
Highlighting that most of the perpetrators of child sexual abuse are’family members’ or ‘someone ‘known’ (as per the 2016 NCRB ‘Crime in India’ data), the paper argued that, “death penalty will put the child in a loyalty conflict, due to which she will not reveal the abuse”. It also added that expansion of death penalty to child rapists will seriously reduce the reporting of crime.

Death Penalty a hollow claim of deterrence
The paper argued that death penalty for child rape is not an effective instrument of deterrence. “Even after executing Nirbhaya convicts and bringing severe punishments under substantive as well as juvenile laws, there has been a considerable rise in child rape cases in the entire country, explaining the ineffectiveness of death penalty as a deterrent”, Chandra said, adding that, “certainty and swiftness of punishment will have greater deterrent effect than severity of punishment”.