A heart-wrenching incident has come to light in Lucknow city of Uttar Pradesh. Here an 80-year-old woman was killed by a pitbull dog. The said woman lived and fed two pets raised by her son. In the end, the 72-year-old woman had no idea that she would die in an attack by one of the two pets. Sensation has spread in the area after the body of an old woman was found after the attack of a pet pit bull dog in Lucknow. 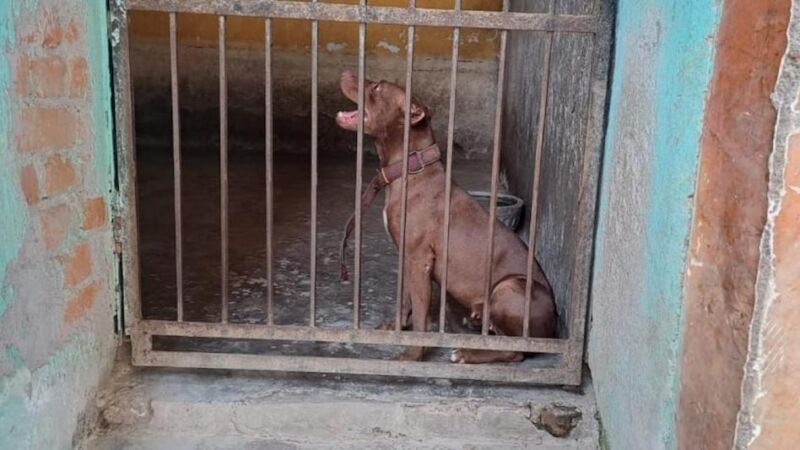 It is learned that the son of an eighty-year-old woman named Sushila Tripathi works as a trainer in a gym. He was very fond of keeping dogs, due to which he raised a Labrador and a Pitbull dog. When the son was not at home, his mother Sushila Devi used to take care of the pet dogs. It is being told that she lost his life in the attack of a pitbull dog named Brownie. On the day of the incident, Sushila Tiwari had gone for a walk with Pitbull, the dog was walking with her but then suddenly Brownie started attacking her.

Sushila Devi kept crying helplessly but at first no one came forward. By the time people saw her, the old lady was covered in blood. After getting the news his son came home and took his mother to the hospital. Where doctors declared her brought dead. After post-mortem, it was found that there are 12 deep wounds on the body of the woman. There are bite marks everywhere on the arms, legs, abdomen and back. There is also a deep wound on the head. According to doctors, examination of the scar revealed that the more the old woman tried to escape from the dog’s hand, the more the brownie attacked her. The question naturally arises that how did a three year old pet dog become so violent?

Pitbulls are one of those breeds that have two different opinions on whether they should be kept as pets. One of the reasons, the pitbull breed was created as a fighting dog and their spirit was to fight and hunt in order not to be with their masters and to protect them. Now that a pet Pitbull has gained immense popularity, even in India, Pitbull are in high demand at many dog ​​shows.

After this horrific incident, the son of the deceased woman went ahead and handed over his dog to the Lucknow Municipal Corporation. Since the dog is now a man eater, it is not safe to keep it in public as it can attack more people.

There are many examples of people killed in pitbull dog attacks. Especially small children have become victims of this in large numbers. It has also been banned in many places. Still people in India are keeping it. Love towards animals is fine but lessons should be learned from such incidents.