by IS NewsDesk
in Nation, Trending 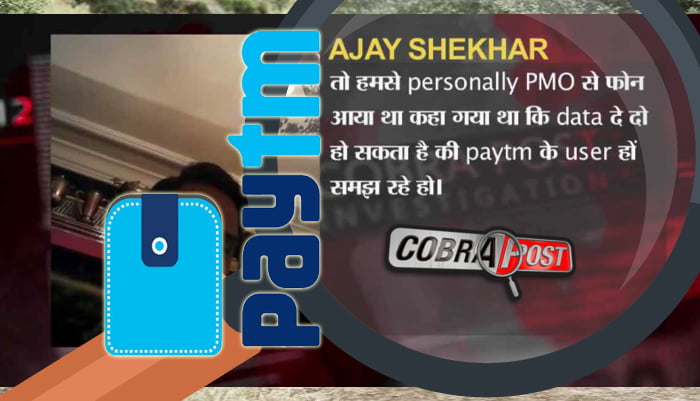 Cobrapost a media website known for their inspecting journalism released the second segment of “Operation 136” in which they further exposed various corporate and news outlets. In the first section that came a few months ago they exposed, how comfortably main stream news and media outlets like ABP news, AmarUjala, schoopwhoop settling to push political and religional agenda in exchange of money.

The latest released cobrapost sting video shows the senior VP of Paytm Mr. Ajay Shekhar Sharma claiming that PM’s office demanded for data of the user from Jammu and Kashmir to identify stonepelters. In an conversation with Cobrapost’s journalist Pushp Sharma, acted as a priest requesting endorsements on Hindu scriptures.

Since the other party involved in this sting operation is itself the Government of India so this can’t be said as illegal however its a clear violation of the Paytm’s policy for data protection.

We will not sell, share or rent your personal information to any 3rd party or use your email address/mobile number for unsolicited emails and/or SMS. Any emails and/or SMS sent by Paytm will only be in connection with the provision of agreed services & products and this Privacy Policy.

Ajay said many times that he has a good understanding with The RSS and BJP and if the proposal is from them he will accept it without a question.