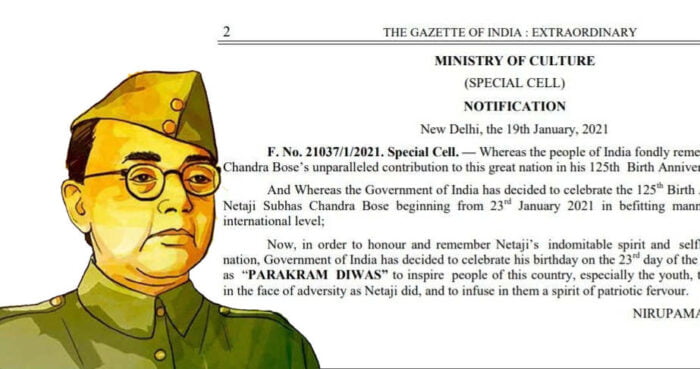 In the official gazette of India released on Tuesday 19th January 2021, Indian government declares Subhash Chandra Bose birthday to celebrate as Parakram (bravery) diwas, in the remembrance of Netaji’s indomitable contribution to the country’s freedom.

Netaji was born on 23rd January 1897 in the small town of Odisha called Cuttack. The year 2021 marks 125th birth anniversary of the legendary freedom fighter Netaji Subhash Chandra bose who created and led the Azad Hind Fauj to aid India’s efforts for freedom.

The announcement came from the Ministry of Culture, Government of India which said: “To honour and remember Netaji’s indomitable spirit and selfless service to the nation. The Government of India has decided to dedicate his birthday (January 23) every year as `Parakram Diwas`”.

In that bid, the GOI has also announced its plans to set up an exhibition and some light shows in the victoria memorial hall Kolkata. Prime Minister Narendra Modi is likely to pay a visit to West Bengal in order to attend the celebrations.

One of the attractions of the program will be a 400-metre-long canvas to be painted by Patua artist. It will depict all important phases and struggles of the Neta Ji’s life.

Earlier this month, Prime Minister Modi had formed a special committee in order to plan and oversee the arrangements for the celebrations. The committee had 85 members including leaders like Amit Shah alongside various historians, bureaucrats and researchers.

West Bengal CM Mamta Banerjee’s party Trinamool Congress has alleged the declaration to have underlying political motives as the elections to the state legislature are scheduled to take place this year.