LokSabha 17: The Final Outlook of the New Cabinet 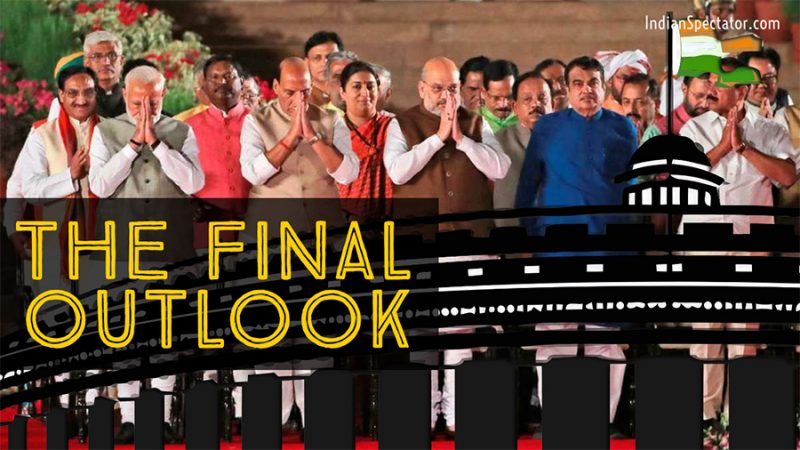 On May 30, 2019 7:06 pm (IST) at the forecourt of Rashtrapati Bhavan. Narendra Modi, The man who headed the LS16, took oath of the highest office as the as the leader of the coming 17th Loksabha, Followed by his council of Ministers including the cabinet ministers and ministers of state. However the portfolios are yet to be given to the respective ministers though the final picture of the coming cabinet is rather clear.

In the preceding government, total tally of the ministers was 76 which has been shortened down to 58, faces like Anupriya Patel, Radha Mohan Singh, Jayant Sinha and many others have not been included, important to mention leaders like Arun Jaitley and Sushma Swaraj who have purposely kept away from the government owing to their health or personnel issues.

Although, no constitutional position as the number two exists, it seems there is a tussle between Amit Shah and Rajnath Singh to be the second. PM modi has been very explicit (in a good way) in terms of his choices and decisions even then it is less likely that he’ll grant incharge of Home Ministry to Amit Shah who is under jurisdiction for criminal offences.

The Union Council of Ministers For LS17:-

1. Prime Minister Narendra Modi, the forerunner of the Bhartiya Janta Party, leader of the new Loksabha, who got re-elected from his constituency, Varanasi of eastern UP. The face of a historical government, as no party has ever retained the power with a clear majority.

2. Rajnath Singh, number two in the last government, held Home Ministry in the NDA 1. One of the rare leaders of BJP who have successfully retained his political charisma from the days of Atal Bihari Vajpayee government. (UTTAR PRADESH)

3. Amit Anilchandra Shah, Chanakya of the BJP, he won his election from Gujarat’s Ahmedabad LS seat. Synonymous to election management, have worked extensively on the backstage in NDA 1. (GUJARAT)

4. Nitin Gadkari, Considered highest performing ministers of the previous government, have headed the most trickiest ministry like the River Development & Ganga Rejuvenation. (Maharashtra)

6. Ravi Shankar Prasad, A veteran BJP leaders who rose during the times of Jai Prakash movement, also and advocate in the Ayodhya dispute. (Bihar)

8. Ramvilas Paswan, Leader of the LJP, He is known for making exact calculations to somehow fit in on the wining side, he held ministries in both the NDA1 and UPA1. Last year he contested from Hajipur seat of Bihar, in election19 he has been assured of a RS seat. (Bihar)

11. Thaawar Chand Gehlot, Former minister of Social justice and empowerment. He hails from (Madhya Pradesh) has been inducted to council of ministers through Rajya Sabha.

12. Subrahmanyam Jaishankar, Ex Foreign Secretary and one of the most credited diplomat of the Modi government. He had played key role in the historic nuclear deal during the Manmohan Singh’s government.

15. Smriti Zubin Irani, (UttarPradesh) The giant killer from the BJP, she defeated Prime opposition’s Rahul Gandhi from his home turf of Amethi.

16. Harsh Vardhan, (Delhi) He won his election from Delhi’s Chandani chowk seat. In the NDA 1 he held ministries like the ministry of science of technology and Health ministry.

18. Piyush Goyal, one of the most connected leaders of this new era, he has been in close circles with the volunteers of the BJP and mission Modi. He has a huge list of followers on twitter, Modi’s go to for affairs related to Railway and finance after Arun Jaitley fell ill in the last government. (Maharashtra)

23. Arvind Ganpat Sawant, He represents Shivsena, one of the oldest ally of the BJP replaces Anant Geete. (Maharashtra)

24. Giriraj Singh, The most controversial leaders of the NDA 1. He was initially upset after been fielded from Begusarai, opposite to Kanhaiya Kumar. Giriraj won the LS seat with one of the highest margins. (Bihar)

S Jaishankar Sworn In The Oath For The Cabinet 2.0, Who’s He ?