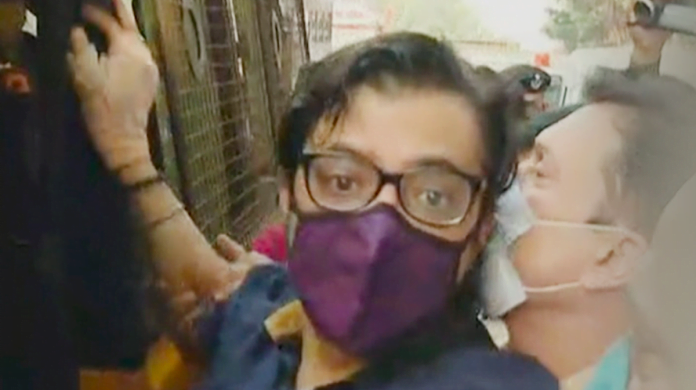 Arnab Goswami, editor and managing director of Republic TV, who was arrested on November 4 in connection with the suicide of Alibag architect Anvay Naik, has been released from Navi Mumbai’s Taloja jail. As soon as he came out of the jail, Arnab hailed Vande Mataram, Bharat Mata Ki Jai. There was a big crowd of his fans near the prison to receive him after Supreme court approved his interim bail request.

Journalist Arnab Goswami and the other two accused were remanded in judicial custody for 14 days by District & Sessions Court, Alibag. The jail term was to expire on November 18. However, Arnab and other two accused in Anvay Naik case had challenged the order in the Mumbai High Court. There, the bail application was rejected. Meanwhile, Arnab had moved to the apex court as he could not get relief from the high court.

An emergency hearing was held before the bench of Justice Dhananjay Chandrachud and Justice Indira Banerjee. Without intervening in the entire case, the bench ruled only on the bail application and granted interim bail to Arnab Goswami including the other two accused, Arnab has been released from Taloja jail after completing the necessary legal process after receiving a copy of the order after the Supreme Court granted him bail. Arnab and two other accused have also been released from jail.

Meanwhile, Arnab exhibited a show of his strength outside the jail. A large crowd had gathered outside the jail at the time of Arnab’s release. Arnab thanked his supporters and fans by showing them a victory sign as soon as he was released from jail. Raising his hands, he was loudly announcing Vande Mataram, Bharat Mata Ki Jai. Some even showered flowers on his car. Considering the crowd, police security was also beefed up. Police had to work strenuously to control the crowd.

“I am grateful to the Supreme Court for the bail. This is a victory for the Indians,” said Arnab Goswami.

World Records By Narendra Modi Every Indian Must Know