Home >> Why does India need evidence-based crime policy more than ever? 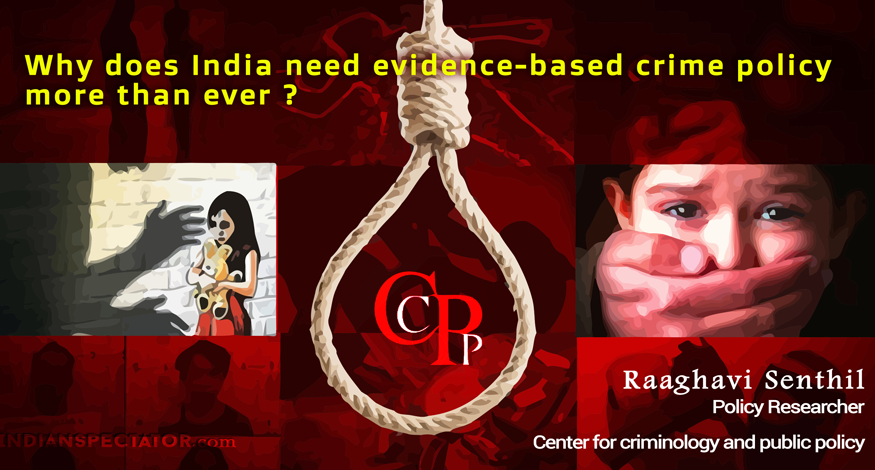 On 28th December, 2018, the Union cabinet approved amendments to the Protection of Children from Sexual Offences (POCSO) Act, 2012, to extend death penalty to all cases of “aggravated sexual offences” against children, both boys and girls, below 18 years. This comes months after the Cabinet first introduced death penalty for raping girls below the age of 12 years, in the wake of rape and murder of an eight-year-old girl in Kathua in J&K. If this amendment is approved by the Parliament, punishment for aggravated sexual offences will be a minimum of twenty years up to life imprisonment and even death.

At first glance, this amendment seems to support the ideology that severe punishments will deter the commission of child rapes. But, criminological evidence on the effectiveness of capital punishment suggests that applying death penalty is ineffective as a deterrent and is more expensive than other sentencing measures. It also goes ahead and illustrates that promoting ‘sexual abuse prevention education’ in schools and communities is a much viable solution to curbing child rapes.

Despite compelling evidence, this proposal – supporting serious investment in prevention programs – remains politically nonviable. Policies aimed at protecting children and providing survivors with justice continue to form out of impulse, with little to no certainty that they will effectively bring down the incidents of child rape.

Leave aside the issue of child rapes. Almost every bill relating to crime is scrutinized on the basis of what legislators ‘believe’ might reduce crime rather than what would ‘actually’ reduce crime. And as they exercise their discretion, no serious consideration is given to how ‘futile’ policy decisions would impose additional burden on exchequers.

How then does one discern what works in crime reduction and what doesn’t? How does one ascertain that a legislation which is passed will truly benefit the stakeholders – and is not just another election gimmick?

The answer lies in adopting what has proved to be the most robust, cost-effective and informed way of decision-making – using research evidence in policy process.

Emphasizing that time has never been more ripe for the expansion of criminological research in the public policy arena, the authors share a perspective on why there is a gap between research and policy in criminal justice, and how conveying research findings to policy-makers can result in tangible policy outcomes.

“It is almost obvious what is to gain from policy making that is informed by rigorously established objective evidence. Criminal justice policies impose heavy costs on the government budget. At times of financial crises and under duress to show tangible results, the government can often be pressured into making ill-thought-out decisions. It is only imperative, then, that these policies be evidence-based, in order to avoid bad laws and bad justice”, the paper stated.

How far across evidence based approaches are adopted by policy-makers, as they decide on criminal justice policies?

“In India, criminal justice policies are traditionally shaped by beliefs, emotions and political expediency. Governmental strategies intended to prevent crimes, support crime victims, and punish offenders appear to form – rather than be formulated – out of situational compulsions. The overhauling of juvenile laws after the horrific Nirbhaya tragedy and the recent passage of bill seeking death for raping girls below 12 years are typical examples of government’s knee-jerk decision-making”, the paper said, noting that: “despite seemingly natural connection with government policy-making, the scientific knowledge generated within the fields of criminology and criminal justice remains largely underutilized”.

The paper, which was published in the International Journal of Criminal Justice Sciences, further noted that:

“due to inherently political nature of policy making, the costs of crime and criminal justice responses are rarely deliberated over, while legislative debates are reduced to a simple binary of whether bill should become a law or not?”

Elaborating on why evidence-based approaches are often ignored by policy-makers, the paper cited several reasons – including fear of appearing soft on crime, partisan control of the legislature and fear of being criticized for wasting money on experiments – that direct policy positions in a politically viable pathway.

In what ways then can policy process be informed by rigorous research evidence?

“To enable the creation of evidence-driven policies, it would be helpful to involve criminologists and criminal justice experts in legislative process and encourage them to give expert testimony. Although India’s legislative process doesn’t statutorily mandate such participation, their involvement will only help the decision making body to interpret the quality and meaning of the evidence (in relation to local needs, fiscal constraints, contexts, and visibility of the problem)”, the paper recommended, adding that: “central government should raise an infrastructure to monitor research evidence and link them with policy process. Research to policy linkages will further strengthen by creating forums that enable criminal justice researchers to exchange their findings with policy-makers and facilitate the formation of common policy objectives.”

The paper also noted that connecting criminal justice researchers and policy-makers will dramatically increase the access to and accessibility of research evidence.

Shouldn’t the Indian Government then embrace and prioritize evidence-informed policy-making?

“As the society aspires to get better administration of safety and justice, embracing evidence-based policy-making will only help government agencies to inform better policy decisions, save public money and improve criminal justice performance”, the paper concluded.

“Applying evidence-based practices in criminal justice policy-making will be the biggest evidence of democracy”.

(Raaghavi Senthil is an Early Career Researcher at the Center for Criminology & Public Policy, India)