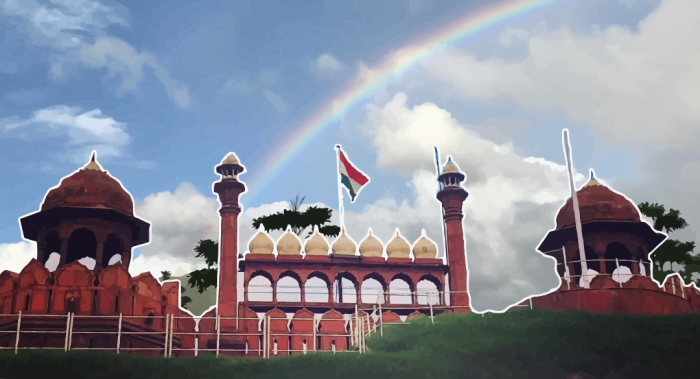 The Ardent and gung ho celebrations that glitter in the morning of Independence day harbours in my mind that morning of 1947 when Jawaharlal Nehru unfurled the national flag of india under the clear and cerulean warmth of the sky blessed with the regalia of a vehement Rainbow which was sighted by the scores of people witnessing those moments of smoking exuberance.

What tickles in my mind is a great analogy of Indian culture that was reborn on that day and the ratiocination a rainbow resides within itself, A Rainbow is nothing but a reminder that a plenary gloom of light as we see is actually a frolicsome amalgamation of 7 colours that give rise to a white colour. The Indian history and culture which I see is a similar chiaroscuro of different shades of multifarious cultures, traditions that are imbibed. Perhaps that was a de facto message to whole world from the nature itself what idea of a great nation just born stands for. That rainbow visually might be taken off but that idea and that message kept thriving for decades, that rainbow didn’t fade from the sky of pluralism that encompasses our nation.

On the eve of Independence 2018, we unfortunately are living in the same nation where that idea stands imperilled for the spirit of pluralism has been taken to the cleaners and the nation is hammered upon by the philosophy of hate and identity politics.

A complete negation of what the idea of our nation has always stood for. The idea of india is anathematized by the doctrine that was followed by the likes of Pinochet. The idea that strength of the nation lies in multiculturalism and the panoply of multifarious race, religion, caste encompassed and thriving as one nation is being ferociously attacked ad nauseam and there’s a malafide attempt to transmogrify the idea of india, the idea that it doesnt matter to them who you are as a human, what matters is to which group identity you belong to. This idea has never let india or any nation remain united and strong. As responsible citizens of this country, it is our job to restore that idea that our nation was born with. On the eve of Independence 2018, it’s fitting that we remember the message that rainbow had for the whole world and how that rainbow is on the edge of fading today and how can we together keep it shining forever.