Fugitive terror-funder Shahid Uddin Khan, who is wanted by Interpol, has filed a false case under Digital Security Act (DSA) against internationally acclaimed multi-award-winning anti-militancy journalist and editor of Weekly Blitz newspaper, Salah Uddin Shoaib Choudhury with the Cyber Crime Tribunal in Bangladesh. Case number 195/2021 was lodged by Khan’s cousin Shahana Rashid Sanu in June last year. Accordingly, the case was sent to the Criminal Investigation Department (CID) for investigation and recently an 82-page report has been submitted by the investigation agency with the court. 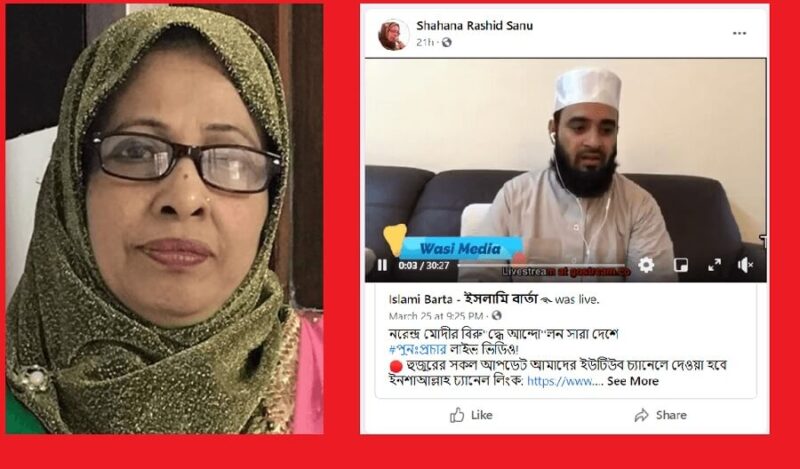 Shahana’s son Shamol Mahmood (Anjan) is a student of Malaysia’s LimKokWing University, which is accused of breeding militants and racists. Several students of this university were arrested by the counterterrorism unit of the Malaysian Police for their direct involvement with Islamic State (ISIS). Since 2019, Shahana Rashid Sanu has been sending hundreds of thousands of takas to her youngest son Shamol Mahmood (Anjan) to Malaysia through illegal channels, which is a crime under the Money Laundering Act of Bangladesh.

Money laundering is considered an offence because it has the potential of devastating economic, security, and social consequences. It is an avenue for drug dealers, smugglers, terrorists, illegal arms dealers, corrupt public officials, and others to operate and expand their criminal enterprises. It can also adversely affect the collection of government revenue and deprives the government of due revenues.

The Government of Bangladesh promulgated the Money Laundering Prevention Act, 2002. Subsequently, in order to meet emerging international standards, subsequent amendments were made in 2008 and 2012. The main objective of the 2012 Act is to tackle illegal money transfers to different countries. In order to exercise the powers, and perform the duties, vested in Bangladesh Bank, a separate unit named Bangladesh Financial Intelligence Unit (BFIU) has been established within Bangladesh Bank.

Shamol Mahmoud Anjan is a cadre of the student front of Bangladesh Nationalist Party (BNP), who fled the country in 2014 and tried to get political asylum in Canada.

According to information available on the web, back in 2013, Shamol took part in BNP-Jamaat’s acts of terrorism and arson attacks in various parts of Dhaka city. Subsequently, although he was accused along with others in several criminal cases lodged with different police stations, Shamol could not be apprehended as law enforcement agencies were unaware of his full name and other details. As police started raiding various parts of the Uttara area in search of Shamol, he managed to flee Bangladesh for the US under the disguise of a student.

But after arriving in the US, Shamol Mahmood Anjan did not show up in the college he got admitted to and continued political activities and propaganda against the Awami League government. This had made the Federal Bureau of Investigation suspicious and the FBI summoned Anjan for interrogation. Sensing legal problems, Shamol Mahmood Anjan fled the United States and entered Canada through the land border, although it is not known if he had obtained a Canadian visa. Reaching in Canada, Shamol Mahmood Anjan filed an application seeking political asylum.

In the asylum, Shamol declared his affiliation with the student front of Bangladesh Nationalist Party as Assistant Secretary, International Affairs of BNP’s student front Bangladesh Jatiyotabadi Chhatra Dal (Bangladesh Nationalist Student Front) and said, he and his family members, including his father Abdur Rashid were facing numerous forms of cruelties and repressive acts by the Awami League members and activists. He even went further stating, Awami League activists made an attempt to assassinate his father, Abdur Rashid.

But, Shamol’s asylum petition was rejected by the Canadian immigration authorities due to his criminal records in Bangladesh. Moreover, sitting in Canada, Shamol Mahmood Anjan was running notorious propaganda against the Awami League and Prime Minister Sheikh Hasina.

According to information, back in 2012, Shahana’s other son Sajal Mahmud Ony abducted an Indian national at gunpoint. Later police rescued Sonjib Saha in critical condition and arrested Ony and other culprits. According to Bangladesh Police sources, there are several criminal records against Sajal Mahmud Ony with various police stations in Dhaka.

As Salah Uddin Shoaib Choudhury and his newspaper Weekly Blitz have been exposing criminal activities of Shahid Uddin Khan, the Islamic State (ISIS) funder and accomplice of Dawood Ibrahim used his cousin Shahana Rashid Sanu and her sons in filing the above-mentioned false case against Mr Choudhury. Khan had also exerted influence through an Additional DIG of CID in this case.

It is a matter of great mystery as to why the Cyber Crime Tribunal in Dhaka had accepted the case lodged by Shahid Uddin Khan’s cousin Shahana Rashid Sanu and how this vicious racket has succeeded in exerting influence on the Criminal Investigation Department in getting a biased report. Bangladesh authorities are urged to initiate an investigation into this matter.