After the narrative of political submission and PM’s invitation to the family members of over 50 BJP workers who were killed allegedly as a result of series of political violence in West Bengal, surfaced out. CM Mamta Banerjee has rowed back her decision to not to attend the swearing in ceremony which she had accepted earlier.

She also said “This is completely untrue. There have been no political murders in Bengal. The oath-taking ceremony is an august occasion to celebrate democracy, not one that should be devalued by any political party”.

In her tweet, Mamta accused PM Modi of politicising a democratic event to score brownie points. she denied any substance in the theory of political murders and even said, deaths could be a result of personnel enmity, family quarrels and other non political disputes. However it is still unclear of how far the investigation and judicial inquiry have gone in those cases.

BJP has traditionally been a minority player in the Bengal’s political scape both in state assembly and LS elections, however this time the BJP managed to bag 18 seats from the state and an impressive 40% in vote share. This clearly portrays BJP ideological strengthening in the WB region and could possibly become the principle opposition in the state assembly. 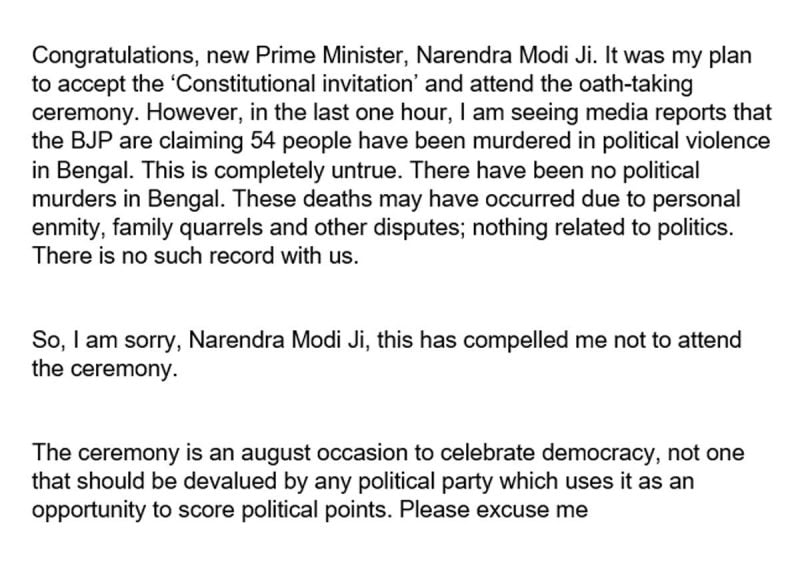 The oath-taking ceremony is an august occasion to celebrate democracy, not one that should be devalued by any political party pic.twitter.com/Mznq0xN11Q


Mount Everest: why there is so much crowd lately ?