Xiaomi’s sub-brand Redmi just launched their two mid range flagships for Chinese market with a staggering value for money, impressive specification and of course an aggressive price tag. This apparently seemed following the POCO streak since the time it was announced in china, but there weren’t any indications besides the price and the flagship level processor that were put in together in the POCO way for k20’s and k20 pro.

This has been seen at times in the past that Redmi swapped their product name in the last hour of the launch but if the rumour is to be believed than this is going one up when xiaomi changes the sub-brand of their phones. There hasn’t been any K series phone by xiaomi in India which also suggests k20 is going to make to international market with a different name.

Oneplus which is known for long as budget flagship killer is sliding swiftly to the premium range of smartphones hence vacating a huge opportunity for brands like Xiaomi. Poco F1 which was launched last year was exactly placed in this gap and marketed as flagship killer. It did turned out the right sweet spot for xiaomi, the device were blown of the shelves and became extremely popular handset in sub 20k price bracket.

As per the sources it is quite certain that the redmi k20 & k20 pro will be rebranded as poco f2 & f2pro but there are still missing jigsaws for us to come to a definitive. A twitter handle @techauntyji also tweeted in tune with this 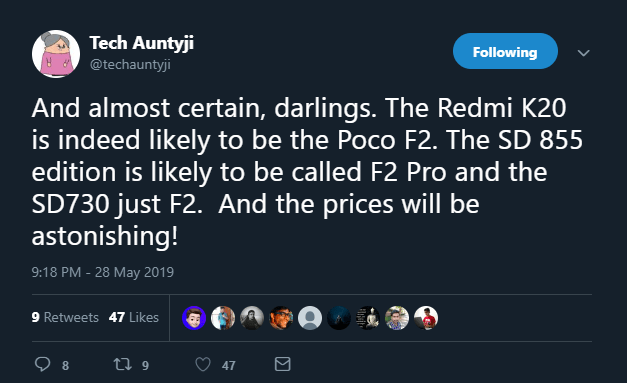 Redmi K20 & K20 pro has all the missing features of last year’s F1, like an astonishing design and good optics, despite of Poco F1’s 845 Snapdragon processor and exceptional VFM, it fell short of posing any real sale challenge to One-plus 6 & 6Ts. It seems that this year, the tables will be turned if the phones launched under 22-20k price bracket.


Mamta Banerjee rows-back her decision of attending swearing in ceremony