by IS NewsDesk
in Politics, Trending 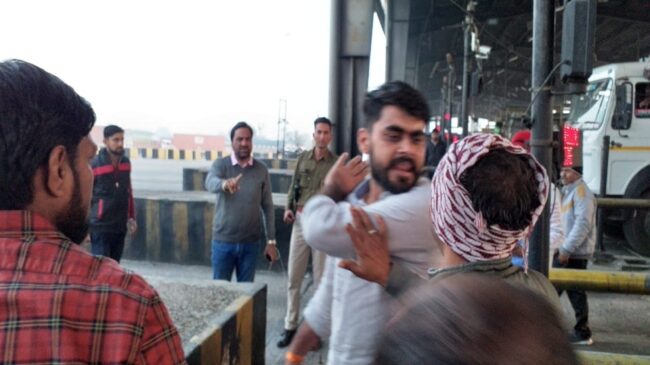 ANI’s official Twitter handle tweeted a video of 5-8 men ransacking a toll plaza somewhere in Rajasthan. Several media outlet identified the goons as supporters of a popular Rajasthan leader Hanuman Beniwal. The toll plaza showed in the video is Shahjahanpur toll, situated on NH 48 that connects Jaipur to Delhi. Hanuman Beniwal is a sitting member of Parliament from Nagaur LS seat of Rajasthan.

As it is clear in the video, some men allegedly supporters of Hanuman Beniwal, can be seen vandalising a toll plaza, breaking the boom barrier into pieces. All this could have been avoided had if the MP supporters have paid a mere amount of one hundred and twenty-five rupees.

While the supporters were having their moment, the CCTV camera of the toll plaza recorded the whole incident.

#WATCH Rajasthan: A group of people, allegedly the supporters of Rashtriya Loktantrik Party MP Hanuman Beniwal, misbehave with employees of Shahjahanpur Toll Plaza and vandalise a toll booth when a boom barrier blocked their way while they were crossing the toll. (19.01.2021) pic.twitter.com/KmGvt1W2Ax

As per a website called Myneta.info, Historically MP Hanuman Beniwal was convicted by the courts under IPC 147, 332, 149, 353, 149 and some cases are undergoing.