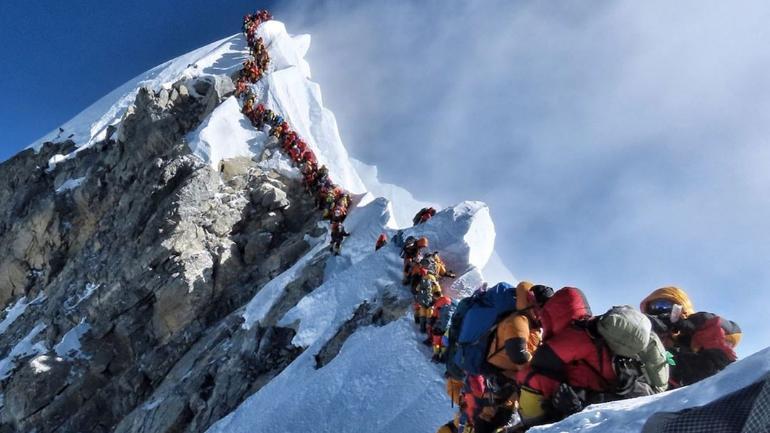 Mountains are the crescendi of the natural beauty. But sadly it was end for few of the mountaineers who were on their expedition to the highest summit of the world this week.

As of today eight people have died on mount Mount Everest this week, four of whom were Indians. In an unusual circumstances (or more of unusual weather conditions) there was a traffic jam in the way of mount Everest. Yes you heard it right.

If you imagine the summit of mount Everest, you might picture a quiet and serene view, while the view being  serene is a fact but being quiet may not be true. As the situation was this week when more than 120 climbers scaled Everest on Thursday, many of whom as a result were caught in the traffic and had to wait for several hours, leading to exhaustion, dehydration and death. Huge traffic was buildup in the summit after 380 permits were issued this season as compared to last year’s 365.

Why so much crowd was there on Thursday? And is it normal?

According to the guides, situations like this often arises during the climbing season. Because the weather at the top is unpredictable. So it totally depends on the window duration of suitable climbing weather. Sometimes the window can stretch for as long as two weeks and sometimes it can be a short window of 1 or 2 days as was the case this week, when between 22-24 may many climbers tried ascending the summit due to Clement weather. But all of this doesn’t scare the mountaineering enthusiasts from reaching the summit as the popularity of the expedition is ever more today and the participation this year is at an all time high.